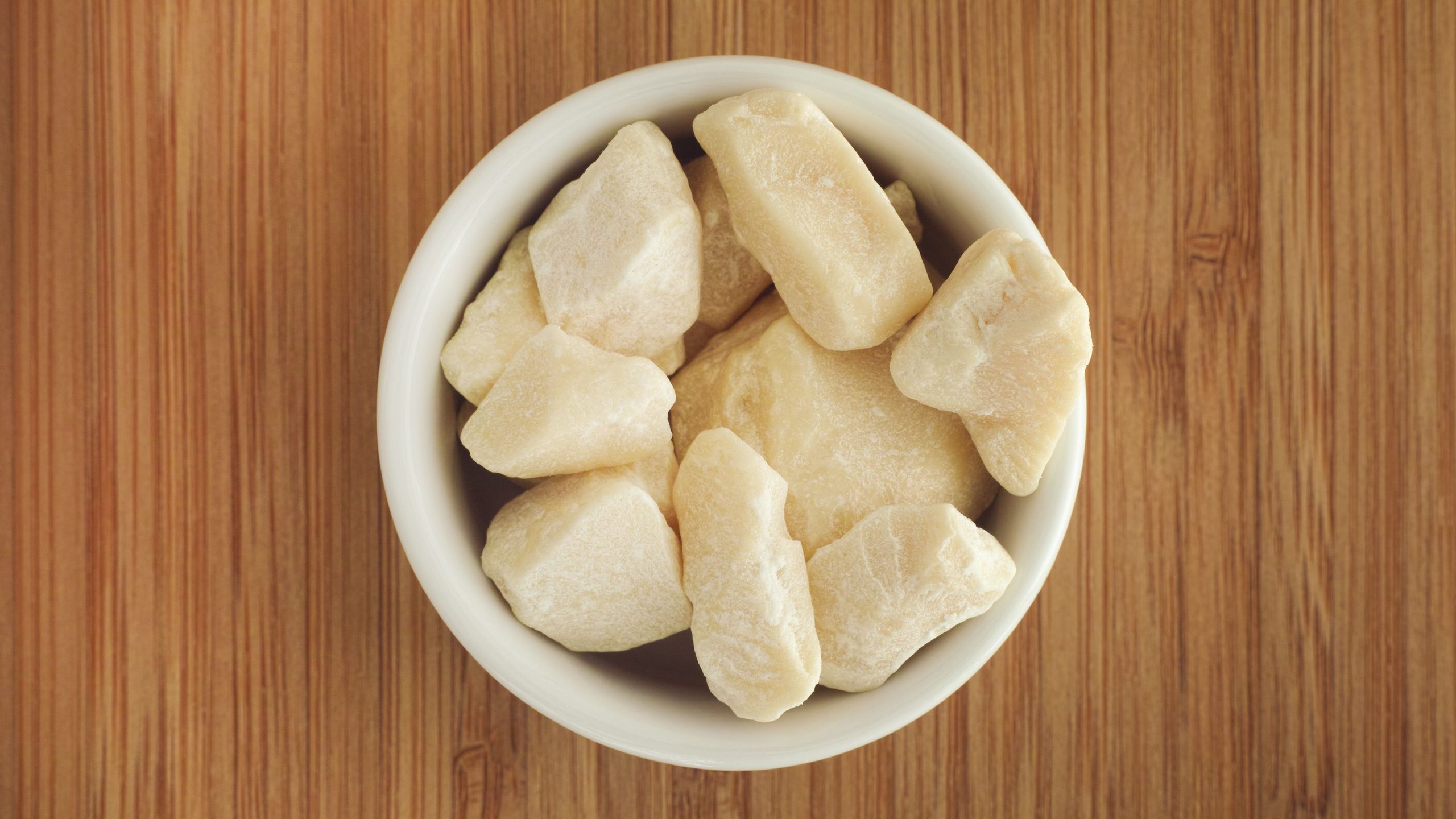 What is cocoa butter?

Cocoa butter is the fat that is extracted from cocoa beans, the fruit of the cocoa tree (Theobroma cacao, L.). The cocoa tree is a tree of the Sterculiaceae family that can reach 20 meters in height, although the most common is that in controlled crops it stays at about 4 or 5 meters in height to facilitate harvesting. The cocoa fruit is an oval-shaped pod that grows directly from the trunk. The color varies according to the variety, taking on yellow, orange or reddish tones when it is at its optimal ripening point prior to harvesting. This fruit is commonly known as a cob and contains between 30 and 40 seeds inside. The seeds are the ones that are subsequently processed to obtain cocoa butter.

Cocoa cultivation extends to specific areas of the globe as it requires certain temperature and humidity conditions. It requires temperatures between 18 and 30 degrees Celsius, with constant rainfall (minimum 1000 mm/year). Its production is limited to countries that are close to the equator, in order of production volume: Ivory Coast, Ghana, Indonesia, Ecuador, Cameroon, Brazil, Nigeria, Peru and the Dominican Republic. These special conditions for its growth make this crop especially vulnerable to climate change (1, 2).

Cocoa has been considered one of the most precious foods in the history of mankind, even the scientific name of the cocoa tree means “food of the gods” (Theobroma). Cocoa was cultivated more than 3,000 years ago by the Mayans and later by the Aztecs, both for nutritional and medicinal purposes. Christopher Columbus and his team described it on one of his trips to America and exported it to Spain, from where it would make the leap to the rest of Europe, where consumption is currently focused worldwide.

Currently there are programs to improve sustainability in the cultivation, harvesting and marketing of cocoa and its derivatives, such as fair trade programs or those of the World Cocoa Foundation (10, 11, 12).

How is it obtained?

The most common way of extracting cocoa butter is pressing. It can also be done using organic solvents or supercritical fluids, but these forms of extraction are not as widely used.

The most common procedure for obtaining it is the one described below. The cocoa beans are extracted from the pods and placed in boxes where fermentation takes place. This stage lasts 3 to 5 days. Subsequently, the fermented grains go through the drying stage, either naturally or artificially, which lasts another 7 to 10 days. After drying, it goes through a roasting and grinding process, from which what is known as cocoa liquor is obtained. This cocoa liquor is the one that contains all the fat extracted from the cocoa beans. At this point, we move on to the pressing stage in which the solid particles (which make up the cocoa cake) are separated from the fat, which is already cocoa butter as we know it.

During this process of obtaining cocoa butter there are stages (such as fermentation, drying and pressing) in which high temperatures can be reached, which negatively affects the amount of polyphenols in the final product. Also, for processing for food use, an alkalinization stage is included (to improve some organoleptic characteristics such as bitterness) that can affect the polyphenol content. With this I want to emphasize that the content of this type of antioxidants in cocoa butter will be limited and as we will see below, butter is characterized by having a lipid composition, not so much an antioxidant.

As you know, cocoa butter is a solid fat at room temperature, with a melting point between 30-34°C. It has a light yellow color and its smell is reminiscent of chocolate (let’s not forget that the chocolate we consume has cocoa butter as one of its fundamental components).

In its composition there is an unsaponifiable fraction that represents between 0.2 and 0.6%. It is composed of glycolipids, phospholipids and phytosterols. The rest of its composition is based on triglycerides, mainly stearic acid (34-36%), oleic acid (30-40%) and palmitic acid (24-29%) and to a lesser extent linoleic acid (2.5-3, 5%). Therefore, cocoa butter triglycerides are mainly saturated fatty acids (C16:0 – palmitic acid; C18:0 – stearic acid) and monounsaturated (C18:1 – oleic acid), which explains many of its physicochemical characteristics. as the solidity at room temperature.

Another characteristic that we may be interested in knowing regarding the cosmetic formulation is the crystalline polymorphism (4, 6, 7) that this butter presents. Without going into depth, this characteristic is what can sometimes cause cocoa butter formulas such as sticks to have a whitish layer or white dots on the surface, an effect known as “fat bloom”. We will talk about it later in the article.

Read More: WHAT IS THE NUTRITIONAL VALUE OF FOOD?

In the introductory formulation course, we talked about butters, grouping them into two large groups, both as structural agents and as emollients. We will talk about its function as a structural agent later, to focus here on its properties as an emollient.

The mechanism by which cocoa butter performs its function is by creating a protective layer on the epidermis. On the one hand, this reduces transepidermal water loss (TEWL) and, on the other hand, it produces a supply of lipids (triglycerides) that reinforce the barrier function of the epicutaneous emulsion. In addition, its application, even neat, is very pleasant as it melts easily on contact with the skin. With this we achieve that the skin is more and better hydrated, improving elasticity by reducing the tightness of dry skin.

All this makes cocoa butter a widely used raw material in the formulation of hydration products. In facial hydration it is not so usual because some studies speak of its comedogenicity, although as you know the comedogenic power of a product cannot be attributed exclusively to a raw material but to the formula as a whole. Even so, its use in facial hydration is not as common as it is in body hydration. We can find solid products like this fun formula that we present to you at Christmas , or in balms, body butters and, of course, emulsions.

Cocoa butter is also one of the most used ingredients in lipsticks, in part due to its melting temperature and “after feel”. Surely you have ever used lipsticks, especially those with a more moisturizing than decorative purpose, and you will have been able to notice that slight smell of chocolate.

Due to its properties as a lubricant and moisturizer, we can find this butter as part of hair products such as conditioners and masks. Although coconut and argan oil are the most used vegetable fats in this type of product, there are also brands that use cocoa butter for these purposes.

As I mentioned in the previous section, cocoa butter (Theobroma Cacao Seed Butter) as a cosmetic raw material can act as a structural agent to give consistency and viscosity to our formula. For this reason, it is used both in anhydrous formulas and emulsions, forming part of the oily phase. In the introductory formulation course, we presented several examples of formulas with cocoa butter, such as a lip balm or an exfoliating conditioning bar.

The handling of the raw material is simple. To avoid possible alterations, it should be stored at room temperature (around 20-25°C), with the rest of the raw materials that do not require cold storage. Commercially it can be presented in blocks or in tablets and we can also find it deodorized. The range of percentages in cosmetic formulation can go from 2 to 90% depending on the type of product. A recommendation to take as a guide could be: 3 – 5% in emulsions, 3 – 10% in balms, 5 – 90% in bars. As I told you before, the cocoa butter is added in the oily phase and heated with the rest of the butters and waxes until it melts (30 – 34°C).

One of the problems that can arise in formulas with cocoa butter is the appearance of white granules (for example in balms) or “fat bloom” in the case of bars. This last phenomenon is that whitish layer or whitish dots that appear on the surface of the product. The appearance of these problems is multifactorial and is due to the crystalline structure that triglycerides adopt in their passage from the liquid to the solid state or even in the solid-solid state, as occurs with “fat bloom”. To control it, we must adjust the rate of decrease in temperature (cooldown phase), viscosity, speed and stirring time (7).

Some studies suggest that a way to achieve stable forms of crystallization of cocoa butter may be to carry out a tempering protocol so that from 40°C the temperature decreases at a rate of 2°C/minute. , until reaching 28°C and then store at a stable temperature for about 24-48 hours and check evolution. In other cases (8) it is suggested that when undesirable points are observed (in the liquid-solid step) the mixture can be reheated to about 32°C (taking into account that the thermolabile ingredients have not yet been added). This last strategy should not be done as a usual practice, but in cases where we need to “rescue” the formula.

It is also important that, as far as possible, the drop in temperature occurs homogeneously throughout the product. Hence the importance of agitation in this tempering phase. There will be cases such as bars in which this is not possible, so it is important in these cases that the cooling is not abrupt and that once solidified the product is kept at room temperature (around 20-25°C) and constant.

Due to everything explained, we must take into account that the environmental factors (temperature and humidity) at which we make our formulas and the subsequent storage, can determine that we obtain a satisfactory result or, on the contrary, this type of problem appears.

Of course, these phenomena will also depend on the rest of the ingredients in the formula. Bear in mind that in addition to cocoa butter we will have other butters, waxes and oils with their own melting points and their crystallization and structure formation conditions. For this reason, as I often say to the students of the course , there is no exact formula to achieve the perfect product. It is necessary to experiment and see the behavior of our raw materials at different proportions and in different scenarios. Getting a stable formula is sometimes not an easy task.